Challacombe is in a sheltered valley within the Exmoor National Park

Everyone enjoys the Challacombe Gala

There are lots of amazing walks in and around Challacombe

Challacombe is a traditional rural "dispersed settlement" (a settlement of scattered farmsteads rather than a nucleated village) about 10 miles from the north coast of Devon with a population of about 150 people in 50 dwellings. Most of the parish is within the protected landscape area of the Exmoor National Park.

Challacombe varies in character from lush sheltered valleys with small enclosed meadows, to wide open moorland with spectacular views. The Chains are the highest point in North Devon and form a natural watershed. The rivers Bray and Barle both start on the Chains, a couple of miles apart, but join the sea nearly 100 miles apart, with the Bray flowing to the north coast of Devon and the Barle flowing all the way to the south coast via the river Exe.

Challacombe (Old English for "chilly valley") has almost certainly been continuously occupied for thousands of years. The current settlement pattern (of dispersed farms and hamlets) was well-established before the 1086 Domesday survey. The Domesday estates were identified over 100 years ago as Celdecombe (Challacombe), Burietescombe (Buscombe), Waleurde (Wallover), Witefele (Whitefield) and Radeode (Radworthy). The parish boundary may be as old as c650 AD, when the Brythonnic Kingdom of Dumnonia became a Saxon tributary; and parts of the field boundaries visible today may be considerably older (perhaps Roman, even Iron Age).

Reconstructing the Domesday landscape of Challacombe raises several problems. Firstly, Saxon estates were measured in hides (one hide supported a household of several families), and estates were usually aggregated into 5-hide units (the minimum holding for a Saxon lord) - but the Domesday estates in Challacombe only sum to 4-hides. Secondly, the modern farms of Wallover, Whitefield, Buscombe and Radworthy are easy to find on an OS map - but Challacombe can't be identified with any certainty (by tradition it was beside Holy Trinity church, although the village nexus today is around the shop and pub). Also, soon after Domesday, most of the estates were gifted to religious houses (Radworthy to St Martins of Sees in France 1093 AD; Whitefield to Barnstaple Priory c1107 AD; and Wallover to Cleeve Abbey 1229 AD) - but why?

Unpublished research has revealed there were actually two Challacombe's. There was the Challacombe in Domesday, later called "Challacombe Rawley" (after the Raleigh family who held it until 1404); and also "Challacombe Regis" ("King's Challacombe" or "Kunelanda") which was excluded from Domesday because it was ancient Crown demesne, and part of the King's farm at Braunton. Kunelanda was the fifth hide necessary to support an independent Manor in Challacombe; and this Manor was almost certainly at Town Tenement, where it appears there was a botolph (or "palace") in the C12th and an aulem ("hall") in the C17th. The early gifts to the church suggest that in the C12th most of Challacombe was within Exmoor Forest (the Forest was subject to harsh fines, which the church was normally forgiven).

There are lots of interesting walks and places to visit in Challacombe. There is a lovely walk from East Challacombe to Barton Town, which takes in a ford with a footbridge; a packhorse bridge; a beech forest; ancient meadows and the Holy Trinity church, that still retains some of its C13th tower and an early stone font. The tower was recently rendered and the lime plaster is a stunning bright white. Near the church are some earthwork remains of former houses and an impressive banked road, which now leads nowhere.

On the other side of the valley is the spectacular Shoulsbury hillfort, enclosing about five acres with double banks and ditches, and containing a Bronze Age barrow, with a Neolithic stone set nearby. By legend it was occupied by St. Petrock in the C6th, and defended by Alfred the Great against the Danes in the C9th. A sword from the Civil War was found here in the C19th. Its unusual name (perhaps from Saxon sol & burh, meaning "muddy fort") is very appropriate as it's always boggy inside and has commanding views over north Devon. It was probably built in the Iron Age or Roman period, perhaps in relation to Sherracombe Ford nearby, which was worked for iron ore from the late Iron Age to the 3rd century AD, and was one of the largest Roman industrial sites in Britain. The outer ramparts are possibly unfinished, and the inside may have once been occupied as a village (although this is unlikely given it's elevation).

The highest part of the parish is known as The Chains, at 485 metres above sea level. The great Mesolithic ridgeway across Exmoor, thought to be part of the only continuous ridgeway from England to Cornwall, runs along the top of The Chains, passing numerous groups of Neolithic stone sets and Bronze Age barrows. Below this is Pinkery Pond, source of the river Barle and thought to have been made to feed a canal that was started, but never finished; and the charming Challacombe reservoir, above which is the source of the river Bray, and the abandoned Domesday farmstead of Radworthy.

The Chains have the largest group of prehistoric monuments on Exmoor, which were probably in use for over two thousand years. The seven foot high Longstone at the head of the river Bray; a possible mortuary platform nearby (where bodies were exposed to the elements, or excarnated) and the enigmatic Quincunx (five stones arranged in the same pattern as the five on a dice) all date from the Neolithic period (around 3000 BC). When approached from the valley below, the Longstone points straight up into the sky, no doubt marking the birth of the river Bray. The Chapman Barrows, a large group of burial mounds from the Bronze Age (about 1500 BC) occupy the ridge of the hill and are visible for miles. Each began as a ring of stones (a ring cairn) used for excarnation, perhaps for a few generations, and when decommissioned, a large mound was built over the top. Incredibly, each mound is made from turf and topsoil from about 10 acres of cultivated field, which field must have been rendered useless for hundreds of years afterwards.

For a small rural community, Challacombe has excellent local amenities. The traditional Black Venus Inn serves award-winning home-made food, fine wines and real ales. It has a games room with a dartboard and pool table, and a small play area in the garden. Challacombe Stores stocks a variety of guide books, snacks, groceries, alcohol, lovely home-made cakes and take-away meals and is also a Post Office and local Information Point. There is a public telephone outside and 'phone cards are available in the shop.

Other facilities in the village include Exmoor Cottage Holidays self-catering holiday cottages at Town Tenement Farm, five stone-built cottages in delightful grounds, all with log fires; spa and treatment rooms at Home Place; and Webbers Travel minibus and taxi service. The Methodist Chapel has a service at 6.30pm on the first Sunday of each month; the Holy Trinity Church has communion service at 11.15am on the second Sunday, and Evensong at 6.30pm on the fourth Sunday.

Challacombe is the perfect base from which to explore Exmoor and the spectacular coastline of Somerset and North Devon.

Within half an hours drive are the wide sandy beaches of Woolacombe, Saunton and Croyde; the picturesque coastal villages of Lynton, Lynmouth and Porlock; the historic harbour at Ilfracombe and most of the best sights on Exmoor, including Tarr Steps, Dunkery Beacon, Heddons Mouth, the Valley of Rocks, Horners Wood and Countisbury Hill.

You can enjoy Challacombe yourself by staying at Exmoor Cottage Holidays, a group of lovely characterful cottages converted from a medieval farm (the site of the original Domesday Manor of Challacombe), each with a cosy log fire and an enclosed garden.

Fly over Challacombe and Exmoor Cottage Holidays in this video made by one of their guests: 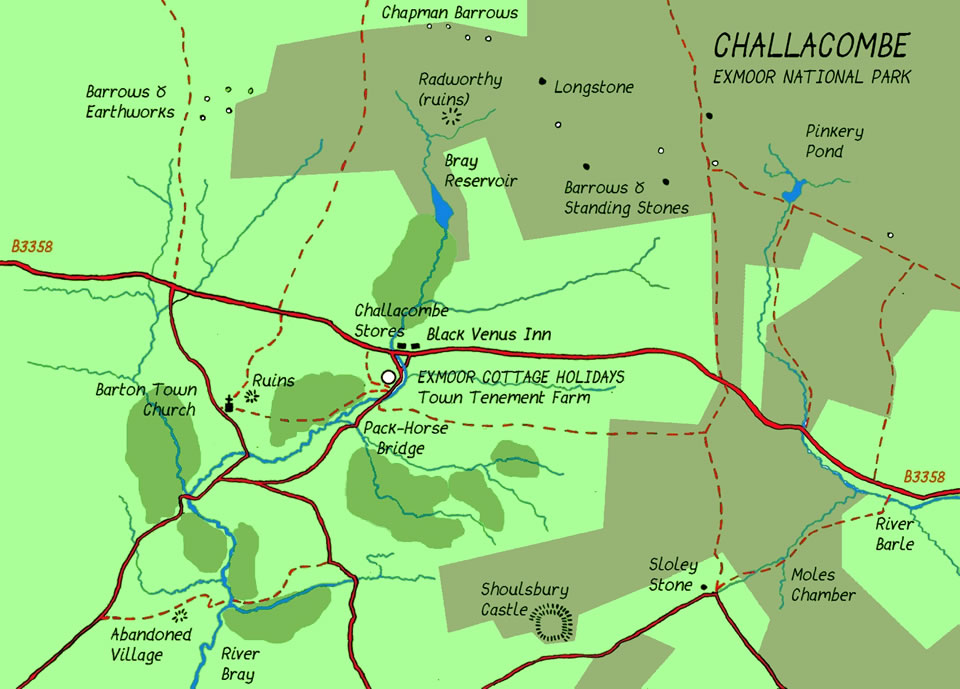